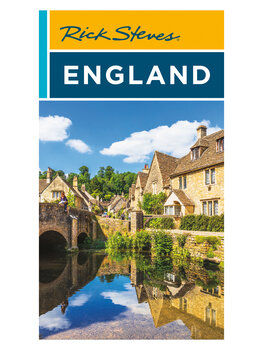 Is This the Right Book for Me?

What's the difference between this England book and Rick's Best of England guidebook?

The shorter Rick Steves Best of England guidebook focuses on England's top destinations and sights, and is in full color.

Both books are packed with hand-picked recommendations and Rick's travel advice and tips for saving time, money, and hassle.

Should I get this England book in addition to Rick's Great Britain guidebook?

If you're just traveling within England on this trip, Rick Steves England is all you're likely to need. But if you're going to Scotland and/or Wales as well, Rick Steves Great Britain is probably the better buy, as it covers most of the same English destinations, plus our favorite places in Scotland and Wales.

If you're going to Scotland as well as some of the destinations that are covered in our complete England book but not covered in the bigger Great Britain book (Canterbury, Dover and Southeast England, Brighton and nearby, Portsmouth, Dartmoor, Cornwall, Oxford, Blackpool, and some of North Yorkshire), you could opt for getting both Rick Steves England and Rick Steves Scotland. (If Edinburgh is your only stop in Scotland, you could instead grab Rick Steves Snapshot: Edinburgh.)

Should I get the London guidebook (or London Pocket guide) in addition to this England guidebook?

If you're spending only a few days in London, Rick Steves England is all you're likely to need.

If, however, you're spending four days or more in London, the extra information in Rick Steves London can be worthwhile. It offers more in-depth sightseeing information, several additional self-guided city walks and museum/sight tours, and more specifics on shopping and nightlife, plus activities for kids. Other information is generally the same — the London chapter of Rick Steves England has nearly all the hotels, restaurants, and nitty-gritty practical advice for London that you'll find in the Rick Steves London guidebook.

It would make less sense to supplement Rick Steves England with the smaller Pocket London guide, which includes just one walk and one museum tour more than what's included in the London chapter of the Rick Steves England guidebook, but otherwise offers far more limited coverage of the city's sights, hotels, and restaurants.

Latest updates: When we learn of critical changes to the information in our guidebooks on England, we post them. (Of course, it's still smart to reconfirm critical transportation and sightseeing details locally.) Armed with a Rick Steves guidebook and these late-breaking updates, you're set for a great trip!

Submit feedback: Once you've used this book in Europe, we'd love to hear your feedback — good or bad — about our advice on sights, hotels, restaurants, and travel tips. We're also interested in any tips or discoveries you made while in Europe. Your comments help us improve our guidebooks for future travelers.