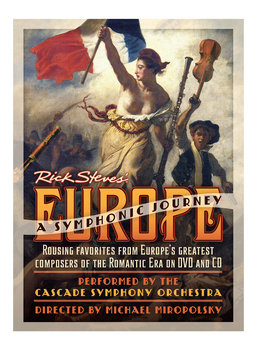 Just as travel broadens one's perspectives, so can music.

Rick Steves Europe: A Symphonic Journey is an hour-long concert and video special. Rick teams up with his hometown (Edmonds, WA) Cascade Symphony Orchestra on a musical tour that starts in the US, then touches down in seven different European countries.

The DVD: For each stop, Rick paints the cultural context of Nationalism and Romanticism in words, then the orchestra plays stirring 19th-century anthems — Strauss in Austria, Wagner in Germany, Smetana in the Czech Republic, Verdi in Italy, Elgar in England, Grieg in Norway, Berlioz in France — each accompanied by glorious video footage. While each piece celebrates a particular nationality, the finale, Beethoven's Ode to Joy (Europe's official national anthem), celebrates a continent whose motto is "united in diversity." (DVD running time: 56½ minutes)

The Booklet: This colorful 24-page supplement includes articles by Rick Steves' Europe 101 co-author Gene Openshaw on 19th-century European Romanticism, Nationalism, and the great composers and music from this era. You'll also learn the story behind this innovative collaboration between Rick Steves, Music Director and Conductor Michael Miropolsky, and the Cascade Symphony Orchestra.

The Music CD: This audio bonus includes full-length versions of songs performed on the DVD, plus an extra track: Edvard Grieg's "Hall of the Mountain King." DVD and CD tracks (all recorded live before an audience) include: